The Wall Street Journal has a charming article on companies trying to fill gaps left by Google.

The company they feature is Quora, Inc. It’s founded by some very famous people – former CTO at Facebook – and was established in 2009. In March, some people invested at a pre-money valuation of $87.5 million (or: more than $10 million/employee, in a year. That’s some equity growth!). It’s particularly impressive since that was when the product was in private testing, before not even a business model but even traffic. 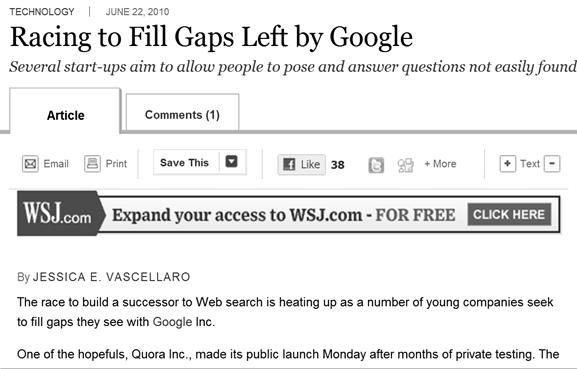 Quora had the bright idea to improve the Q&A space on the Internet. I mean, sure, there’s Yahoo! Answers; Metafilter and Amazon’s AskVille; Answerology, and a great deal more.

But, see, Quora has done something different:

The service allows people to pose or answer questions—working behind the scenes to route questions to the users who can best answer them.

Yes, it uses machine learning to route questions to capable users. This is a break from the current success-model, which is to treat it like a game – reward people with “points” of some kind.

And! Importantly! It’s a gap in Google’s product offerings! Google Answers was retired in 2006. Besides; Google Answers didn’t route questions to experts immediately – they had paid experts who had to trawl through the questions. It wasn’t scalable. Silly Google – no wonder they retired it!

Perhaps my sarcasm is come through a little strong.

Since 2007, Edward Chang – Director of Research, Google China – has been spearheading work in “classification and collaborative filtering.” What does that mean? Well, in 2007, Google launched Otvety (Russia) and Wenda (China) as trials for new applied of Google-researched technology in a product called “Knowledge Search.”

Edward Chang outlines this in a 2008 article outlining some of Google’s Data Management Projects:

Knowledge Search allows users to post questions and then matches experts to timely answer questions. The distinguishing feature of this product compared to competing products is that it offers online question classification, related-question recommendation, and topic-sensitive expert matching.

…. which sounds awfully similar to Quora. And it has the advantage of Google Researchers – experts in this small field of knowledge representation, question classification, and matching – working on it since 2007.

Given Quora’s lack of content, if Google simply ported the existing products over to the US, it would have a directly comparable product backed by the Google brand. And “directly comparable” is probably understating the technological advantage; you don’t put together something really sophisticated in a year, particularly if you’re busy trying to get a company together besides. Besides which, it’s not necessary; the marginal improvements in algorithms would be minuscule compared to spending their time building out the site.

So, if it wasn’t clear enough: I’m astonished at the market research which presented this as a “gap left by Google.” Yes, it certainly hasn’t been a priority; and yes, the current projects are research-orientated; and yes, it’s likely that it won’t become a priority. It’s entirely possible that Quora could become successful.

But that’s predicated on Google not doing anything with assets it already has. It’s certainly possible, and may even be rational – if Quora grows the market, then Google may decide to buy the product and (importantly) the people.

But beyond that, I’m astonished anyone would invest at a pre-money valuation of $87.5 million with this kind of situation, and absolutely no business model. And I quote:

Quora’s business model is currently unclear. Mr. D’Angelo, who became chief technology officer of Facebook in 2006 and left the company in 2008, said "if I had to guess, it would probably involve some kind of advertising at some point."

The defense, of course, is: “Find good people, let them do whatever; they’ll succeed.” And their team is, apparently, top-notch with a history of success.

I find it unconvincing.